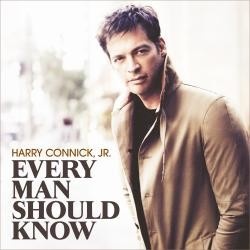 Harry Connick, Jr.'s 2013 studio album Every Man Should Know finds the New Orleans native delving into a handful of original songs that touch upon country, pop, and R&B, with only a few jazz-oriented cuts in the mix. Connick has gone in the original pop direction before with mixed results, on 1994's R&B-infused She and 1995's soulful Star Turtle, as well as on the second line funk-centric Smokey Mary, which came out earlier in 2013. While those albums showcased Connick's long-avowed love of artists like Stevie Wonder and Dr. John, they lacked chemistry, and couldn't compare to his more swinging, jazz-oriented releases. With Every Man Should Know, Connick attempts yet another foray into the world of the contemporary singer/songwriter, focusing less on funk and more on a gospel and country-inflected sound.

On paper, the idea make sense, as Connick's New Orleans stride, blues, and jazz piano chops appear at first to be a good match for this kind of cross-genre pollination. In some ways, Connick is successful here; tracks like the title song and the bluesy, minor-key "One Fine Thing" are compelling and very Carole King meets Van Morrison-esque, framing Connick's big croon, sincere lyrics, and deft piano with some urbane orchestral flourishes. Equally effective is the yearning Latin jazz number "I Love Her," in which Connick lovingly evinces the lush and romantic '60s bossa nova recordings of Stan Getz and João Gilberto, replete with string and flute backgrounds. However, despite the positive aspects of these songs in particular, Connick is anything but a rootsy singer/songwriter, and while he's certainly earnest in his endeavors, he still sound awkward and contrived here, and is undeniably at his best when working in a jazz or traditional pop vein. Even when he leans toward the roiling barroom funk of Dr. John, as he does on cuts like "Friend (Goin' Home)" and the soulful, organ-driven gospel of "You've Got It," he comes off more like an American Idol version of the down-home vibe he's going for. He fares much better when skewing toward his '90s jazz approach, as he does on the laid-back "Being Alone" and the New Orleans second line-inspired "S'pposed to Be," featuring trumpeters Wynton Marsalis and Leroy Jones, respectively. These tracks leap out from the rest with a buoyant, lighthearted energy, and while they don't completely make up for the subpar nature of the album's less impressive tracks, they do manage to make Every Man Should Know a record with something for every Connick fan.